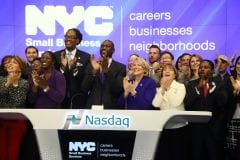 “I was honored to be invited to be part of WIPP’s leadership in the Small Business Saturday Coalition,” remarked Larkin. “The majority of women business owners are small businesses and we represent one of the fastest growing segments of our economy. As a small business owner, I whole-heartedly support all efforts that recognizes and empowers small business nationwide; while simultaneously educating the public about the importance of shopping small to strengthen our economy.”

Women-owned firms make up a third of all businesses in the country, generate more than $1.4 trillion in revenues and employ 8.4 million people. More importantly, they’re growing faster in number and employment than most other companies. The American Express 2015 State of Women-Owned Businesses Report found that between 1997 and 2015, when the number of businesses in the country increased by 51 percent, the number of women-owned firms increased by 74 percent.

Gloria Larkin, President of TargetGov, is a nationally-recognized government contracting marketing and business development expert. She has been interviewed on MSNBC, and quoted in the Wall Street Journal, Forbes, USA Today, INC Magazine, Entrepreneur Start-ups Magazine, and Government Executive magazine. She is also the author of the book, “The Basic Guide to Government Contracting.”

Gloria Larkin serves as the Educational Foundation Chairman Emeritus of the Board of Directors and is the past National Procurement Committee Co-Chair for Women Impacting Public Policy (WIPP), a non-partisan organization representing
over 6,200,000 women nationwide.

TargetGov provides expert consulting services and business development products which have directly resulted in clients winning billions of dollars in federal contracts. The company is committed to helping all of its clients reach their contracting goals in the federal marketplace. Learn more and follow us on www.targetgov.com,  @TargetGov, Gloria Berthold Larkin

Use these tools to help produce winning Capability Statements.

Please wait while
we subscribe you…
Thank you, email confirmation
should arrive shortly!